Mike "Moose" O'Malley did an exceptional job of putting together this game. 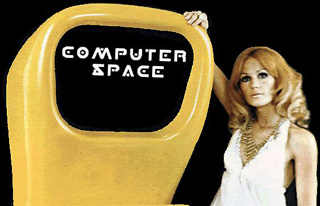 Here is the installer.

Again many thanks to Mike for this work. I recommend you check out his site for his other projects.

After you have enjoyed the game, you may be interested to know there are many options that can be configured. Right click on the main screen to access these selections.

There is no Hyperspace mode. In the original, it was possible to continue gameplay by inverting the background stars and restarting the clock. It didn't add much to the game, it was merely a kind of "extended play." To be honest, I don't play with that enabled on my own Computer Space as I feel it just drags out the game.

The score is not hex. What I mean is, the original machine seems to be designed thinking nobody would ever get much of a score on it. As a result, the score only goes up to 15. To make matters stranger still, the game originally did not show double digits for a score. So how did it display scores above 9? In a weird symbol. I have counted these weird nonesensical symbols and they proceed until you have scored 15 times, then your score returns to 0 on the sixteenth score. However, that is a quirk of the original machine and we wouldn't want that in our simulation anyway. Footage of the hex scoring system can be found in the Videos section.

And for those who might say this game is too hard, I can assure you it is an equivalent challenge to the original. The flying saucers do shoot that well. Our saucers in our simulation don't hold still like the originals do so perhaps ours are slightly more difficult, but there is slightly more room in our starfield as well so these differences balance each other out.